Everyone knows about the glorious beaches and fabulous wines of the Mornington Peninsula, but the state and national parks really are the region’s best kept secrets. But the best thing is, they’re easily accessible and simply beautiful. 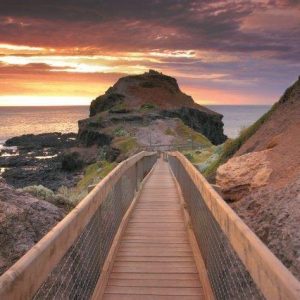 Cape Schanck is at the most southern tip of the Mornington Peninsula at the meeting of Bass Strait and Western Port. It has been protected since the 1800’s and was made a national park in 1988 and offers spectacular scenery.
There are a number of walks around the area with spectacular views along the rugged ocean beaches of Bass Strait towards Sorrento and Point Nepean.

A short circuit walks takes visitors to the start of the wooden staircase and boardwalk which descends to the pebble beach and rock platform. Several lookouts provide spectacular views over the geological formations called Pulpit Rock and Devils Desk which were created by volcanic activity over millions of years. Care must be taken to avoid the large waves that crash across the rock platforms.

Cape Schanck is a good starting point for several scenic walks to nearby Bushranger’s Bay, Fingal Picnic Are and Fingal Beach, and is a key start/end point for the Two Bays Track and the Coastal Trail as part of the Mornington Peninsula 100km Walk

Point Nepean is truly one of Victoria’s beautiful natural landscapes. A special place with so much to see and discover. It has a rich history and played an important role in shaping the early settlement, quarantine and defence of Victoria.

The park is located at the very tip of the Mornington Peninsula, with outstanding coastal scenery and panoramic views of Bass Strait, the Rip and Port Phillip Bay.

There are mutliple public walking tracks for visitors to explore the diversity of plants and animals that call Greensbush home.